“I settled into a story that I was sure was going to be about how you won that race. Then – bam! – the story took a really dramatic turn.  JP”

Several months have passed since my last post. Not because I’ve stopped writing, I haven’t. I’ve written a couple of chapters for my memoir and two blog rants that I threw away. Ranting can be cathartic but not postable. Those writings fall into the “little has changed” category and are awaiting their fate in the “to be deleted” file, but writer’s words rarely meet their death with a delete command or by paper shredder.

Here is the “a lot has happened” news. Like I said, I have been writing and also reminiscing. Recently I met up with my good friends Jim and Laura Griffin while on a road trip to the Keys. I shared a story I wrote about racing Jim’s sailboat in Tampa Bay. I was at the helm, Jim was working the sails and a co-worker of his sat on the rail. Jim remembered it well, it’s one of those life changing moments you carry throughout your life. I Handed Jim the 3 ring binder and he opened it. The title was May Flyer, the name of his Santana 20.

Slowly he leafed through pages nodding his head occasionally while he read. The story was coming back to life in 12-point type. When finished he said, “I could feel the cold and the wet.”

I also shared my story with a group of fellow writers that meet every Saturday morning—Pinellas Writers Group. One of the members, Don, a fellow sailor, and writer, suggested I send it to a sailing publication. I did, and I got a short paragraph reply; …too long, we don’t publish anything above 2500 words. My story pushed six-thousand words. However, I wasn’t crushed; I had been forewarned of the probable deluge of rejection letters. Also, this was my first attempt at being published and given my naiveté, I neglected to read their submission guidelines.

In a politely worded sentence, they said “No.”

The handwriting was on the wall. My story was too long for the average magazine reader. That night I began the process that make most writers cringe; slicing away my precious words. To get the full effect of what that means to a writer, imagine a flight attendant demanding you throw away half of your possessions at the boarding gate.

Anyway, back to my story about my story. A few days went by and I stopped by West Marine to pick up some supplies. While waiting for one of the sales staff, I thumbed through their rack of magazines. One caught my attention, Small Craft Advisor. It immediately hooked me. Unlike some sailing magazines, SCA actually writes about sailing and sailboats. And it’s written by those who have a passion for sailing. While reading, I didn’t feel the need to be standing behind a chrome wheel on a 40ft yacht with a martini in my hand and a bikini-clad babe hanging on my arm. Sorry Sailing South, it’s not my reality.

I bought the September issue of SCA and read it cover to cover. Before I finished, I realized they might be interested in my story! I dropped them an email with a brief description and length of my story. (Now, painfully reduced to 4600 words). The next day I received a response:

“Hi Steve, Sounds like an exciting story and a good fit with SCA. Yes, please do send the full version for us to have a look at. It’s possible we’d need you to reduce it, but we’d like to have a look first. Josh”

Wow, someone will actually read it and judge it by content and not word count. That night I reviewed and self-edited my story for the umpteenth time. After a few changes, I sent it in. I received a response the next day:

“We enjoyed the article. You’re an excellent writer. This piece is a little longer than we typically accept, but we’d hate to see any editing hurt the flow, so would probably just run it as is. We would likely publish it the issue after next. Josh”

A few weeks later, I had lunch with a fellow writer, Jerry Payne. I asked if he would take the time to read my story. It was important for me to have Jerry read my story because he is not only a professional writer, he’s a sailor too.  He emailed me the next day.

“Steve, nice meeting you yesterday. Got a chance to read “May Flyer.” Great story. Took me a bit by surprise, which was good. I settled into a story that I was sure was going to be about how you won that race. Then – bam! – the story took a really dramatic turn. Well writ. JP”

Because of possible legal ramifications, (I don’t think there are any) I will not post my story until January 2016.  In the meantime, it can be found on page 34 in Small Craft Advisor, January issue (#97). Available late December at Barnes and Noble and other booksellers.issue

I haven’t  let this go to my head (yes it has), but it has encouraged me to continue writing (and gloating.) Steve…

I’ll pose a question then try to give an honest answer. Why do we writers fail to read or review books written by fellow writers? It’s not a matter of money since most of us have Kindle, and besides, the cost is usually less than... END_OF_DOCUMENT_TOKEN_TO_BE_REPLACED 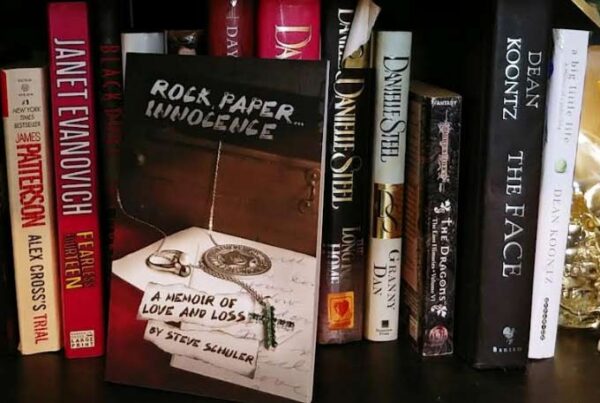